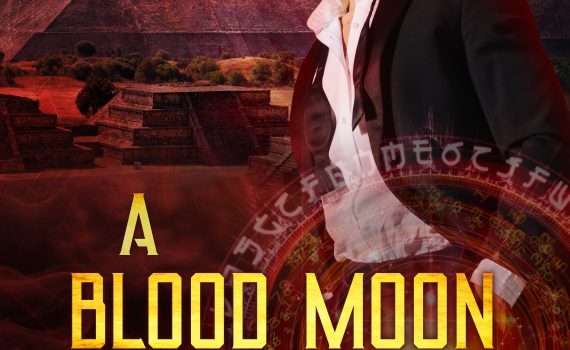 
Here it is- the first chapter of A Blood Moon Swindle!

Quinn jumped up in the air and landed in time with the heavy bass line of AC/DC’s Back in Black. Behind him, floating along in the air, was his Circle of Cerddoriaeth. Quinn had filled the aquamarine magical circle with as much music as he could find and connected it to his emotions. That way it would play the music that matched his mood.

Over time, it had developed a sentience and tonight, it perfectly matched his mood and played the Australian rocker anthem just after he’d struck a deal with Mammon, Hell’s Prince of Greed. Quinn kick stepped down the street while playing an air guitar just like Angus Young, AC/DC’s guitarist.

While Quinn’s air guitar skills were like his dancing, on point, his singing left a lot to be desired. Quinn’s singing relied on enthusiasm rather than any natural talent or skill. When the song ended, the circle thoughtfully played a thunderous applause. Quinn threw the air guitar out into the invisible crowd and took a bow. He slapped and rubbed his hands together. He snapped his fingers and fired off some finger guns into the darkness.

“Okay!” He said to no one. “Time to save the world, and a killer idea to stop a renegade archangel and his minions from destroying the world… go!” Quinn spun around and pointed at the empty air in another direction.

“Hey, this is just brainstorming. No terrible ideas here,” Quinn said to the empty space. “And we will come up with the plan to save the world… now!” Quinn pointed off to the side into the darkness of the street.

The other side of the Savannah, Georgia street didn’t have an answer for Quinn either.

Three women roller skated down the middle of the street. They wove back and forth, moving between each other with an easy skill. They kicked and strutted to the music that Quinn’s circle played as they rolled down the road.

The lead woman, a pale blonde with her hair flowing behind her like a 70s dream, skated along. On her shirt was a print of a massive oak tree. She smiled at Quinn over the rim of her enormous round glasses. She broke from their path down the street to circle around Quinn. She stayed just out of arm’s reach.

Behind her skated an Asian woman. She was small and precise. She skated with the confidence of endless practice. Her shirt had a woman pouring out an old jug of water. The water formed a stream at the woman’s feet. She turned easy and languorous circles without losing her forward momentum. As she circled around Quinn, she ran her hands from her hips up her body to her shoulders. She flared her hands out above her head.

The last was a woman of African descent, with her hair pulled up into a curly and barely contained Mohawk. She skated through the night with the power of the naturally talented athlete. Her cream ribbed tank top had red sheers printed on the front. She trailed her hands through the air, moving her fingers with the currents.

The three women circled around Quinn, skating and turning in time to a song only they could hear. Quinn was very aware of the sweltering heat of Savannah. As they passed in front of him, each one met his eyes. And then without a word, they peeled off back into the night, pushing to gain speed. None of the three women looked back as they rolled away. The darkness of the Savannah night swallowed them, one at a time, leaving no trace that they had ever been there.

Quinn stood still for a minute, hoping the ladies would come back. When they didn’t, he let his breath out and sighed.

“Well, I don’t see how three roller skating women will help me save the world, so let’s get something else on the table.” Quinn snapped out some finger guns again.

From behind Quinn, there was a sloping sound of something wet hitting the pavement.

Quinn closed his eyes and bowed his head. He didn’t want to turn around to see what was blobbing into existence. He wanted the three women to come back. They seemed like a lot of fun. He didn’t want to deal with whatever it was gurgling itself into shape behind him. With a sigh, Quinn turned around to see something pull itself free of a membrane egg sack.

“Gross,” Quinn said. In his time in Hell, he’d seen plenty of these creatures. It was a Winged Horror. Winged Horrors were skeletal bird-like creatures covered in a droopy black tar skin. Every so often bones would poke as glistening black skin as bits dropped off the Winged Horror. Fortunately, they weren’t any smarter than a stupid bird.

They also weren’t powerful enough to come through the barrier between Hell and the world on their own. Something or someone had to bring it through.

Quinn turned to his left. A man wearing a tight leather bodysuit tastefully wrapped in barbed wire stood on the other side of the alley. The Winged Horror pulling itself from its egg sack.

“It will feast on your body as I watch,” the freak said as he bit his lip. He ran his hand down to his crotch to give it a squeeze. He giggled in anticipation.

“Pal,” Quinn said. “I am not in the mood for this. Why don’t you get you and your freak parrot back to Hell before I send you there?”

The man laughed in time with the Winged Horror’s shriek. The minor Hellish creature reared up on its back legs and spread out its skeletal wings. The black tar-like skin stretched out to form sagging wing membranes. Little globs of the skin dropped off the bird creature and hit the concrete with a sizzle.

Quinn whispered and gestured into being a Crimson Chain of Chast, a holding spell he’d learned from Oscar. The glowing aquamarine chain sprang up from the ground to wrap around the throat of the Winged Horror. Quinn’s musical circle flared brightly and jumped straight into DMX’s X Gonna Give It To Ya.

The thing squawked as the magical chain wrapped around its throat. The creature pulled against the chain, flapping its goo-skeletal wings to generate lift and leverage to get free. Black viscous goo splattered as the beast flapped its wings harder and harder.

Quinn turned to face the leather-bound man. Quinn twirled his hand through the air, curling his fingers as he turned his hand to bring out a Circle of Hunllef. He added a Rune of Arswyd to the circle. It flared with a wicked intent, and Quinn threw the arcane circle at the face of the man.

The Circle of Hunllef with the added rune would show the recipient their darkest and most gruesome fear being enacted over and over again.

The man stopped in mid-stride as the Circle of Hunllef hit him in the face. He stared into the Circle, watching his darkest fear play out. He groaned with desire. His hand traced its way up to his chest and pinched one of his exposed nipples.

“Oh, you’re gross,” Quinn said. He strode forward and summoned his Wind Blade. The weapon of a fairy knight was powerful. It could cut through just about any substance in the mortal, or any other world. The neck of a Winged Horror offered no resistance to the blade.

The headless body flopped to the ground, ichor spilling out of the neck onto the cement of the sidewalk. It continued to flap its wings. The butt rose into the air as the neck plowed along the sidewalk, leaving a trail of green blood as it pushed along. Quinn took a quick step forward and kicked the body out into the street.

The headless body tried to flap its wings, somehow sensing that it was now airborne, just in time to be run over by an approaching limo. The shiny black body popped as the car ran it over. The green ichor exploding to coat the underside. The skeletal body got caught in the front grill of the limousine. One wing spur was jabbed into the car, holding the body up as it was dragged along by the car.

The leather and barbed wire-clad rocked back from Quinn’s kick. Blood burst on his face from his broken nose. He groaned in disappointment as the vision of his greatest and darkest fear disappeared.

Quinn punched the freak in the face one more time and then threw him to the ground. He walked over to where the head of the Winged Horror was still on the ground. He pulled the pocket square he’d stolen from Mammon, the Prince of Greed, out of his jacket coat and grabbed the head.

“My dark prince will destroy-,” the man blurted through bloodied lips.

Quinn threw the severed bird-like head and hit the man in the mouth with it. As the man spit the mixture of his blood, the Winged Horror’s black skin goo and green ichor from his mouth, Quinn closed the distance again and grabbed him by the back of his head. Quinn pulled him up to a half sitting position.

“Listen to me!” Quinn gave him a shake. “If I see you again, I will do more than kill your pet bird. Go back and tell all the freaks, that if I see any of you following me, I kill everyone. Got it?” Quinn shook him again.

The limousine pulled to a stop on the road next to Quinn and the leather freak. Quinn took the opportunity and dragged the other man across the sidewalk. Quinn bounced his head off the side of the car. The leather and barbed wire-clad man fell to the ground with a groan.

A well-dressed white man from the heart of the corporate world stepped out of the back of the limo. He was about the same age as Quinn. He calmly looked at the leather-clad freak weeping over the severed head of the Winged Horror. He turned to Quinn and asked, “Having problems with Damned Ones?”

Quinn looked the man in the eyes. “No. Why do you ask?”

The man looked at the leather freak on the ground. The other man was pulling himself along the concrete, making cooing crying sounds at the severed head of the Winged Horror. He turned back to Quinn and said, “Our lord mentioned that you might need transportation and refreshment. He didn’t mention that you would also need to clean up. I believe you’re already staying at our Lord’s townhouse. Shall we retire there?”

Quinn smiled and said, “That sounds great! I could use a shower. Let’s go. What’s your name again?”

The other man held the door open for Quinn. He waited until Quinn was settled inside the limousine before getting in himself.

“My name is Edwin Thornton, Herald.”

“Call me Quinn, Ed,” Quinn said out of reflex. He dug through the small liquor cabinet. He poured himself a bit of the brown liquid. He offered some to Edwin.

“My name is Edwin,” Edwin said as he shook his head no. He pulled out a phone and tapped on it before putting it back down in his lap. They rode in silence as the limo took them back across town. Quinn was unsurprised to find himself back at the townhouse he and Del had shared in Savannah. She had said it belonged to her boss, after all.

Ready for more? Buy it now!