In a city full of superheroes there is only one man interested in balancing the scales of justice: Private Detective Jack Story. If you enjoy detectives, dames, and superheroes who try to commit murder, you’ll love the world of Jack Story.

It’s a world Inspired by the works of Raymond Chandler, Dashiell Hammett, and Ross Macdonald, Alan Moore, and Frank Millar. Jack Story is a hard-boiled private detective who’s seen too many crooked cops, incompetent mayors, and criminal superheroes to believe in much of anything anymore. He tries to keep to himself behind the frosted glass door of his office/apartment, but trouble likes to come looking for him. Trouble that is usually wrapped in a pencil skirt and wearing a pretty smile. 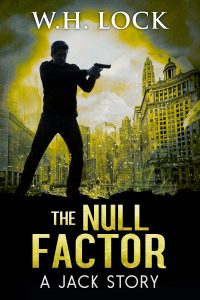 The first: he’s a private detective in a city of super heroes. The second: one of those heroes wants to hire him.

Sheldon Kane is a wealthy real estate developer and former super hero.  It seems Sheldon is worried someone from his hero days is out to kill his young wife.  He wants Jack to follow her around for a few days and prove that it’s just an old man’s paranoia.

It’s easy money. Until she walks into a building that explodes.

The police say it’s a suicide. Jack isn’t so sure. When Kane dismisses Jack from the case with a thank you and a hefty check Jack is sure of one thing: it was murder.

Was she killed by someone from Kane’s past? Did Jack screw up and it’s his fault she’s dead?  Or was it her husband the whole time?

When other people connected to the case start turning up dead, Jack can’t miss a step in chasing a killer down.

Fans of the Jack Story series and readers who love a slow-burn mystery with an explosive end will love The Null Factor. 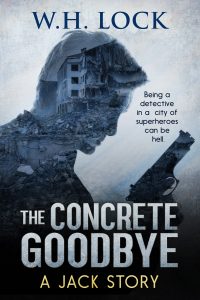 Major Victory, the world’s first super hero is being Blackmailed. The Major’s granddaughter is an unwitting star of a sex tape. If the Major doesn’t pay up, the world gets to see the video. The Major wants Jack to make the blackmail stop. Preferably with lots of pain being inflicted on the blackmailer.

As Jack digs into the case things turn deadly. An explosion kills a young superhero. The granddaughter insists the bomb was really meant for her and not her best friend. That same friend shows up in Jack’s office hours after the explosion, claiming she was the target all along. She demands that Jack find out who’s responsible before disappearing into the night.

Can Jack find who is behind the blackmail and the bombing before others die? Racing against time, Jack discovers something disturbing- what if Major Victory is behind it all? The sex tape. The blackmail. The bombing. The murder. All of it.

What if the world’s first superhero was trying to murder his own granddaughter? 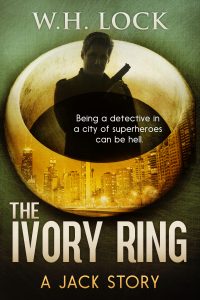 When the son of a long retired supervillain comes to Jack for help, Jack takes the case. The kid is being blackmailed over an affair with the wife of one of the world’s most powerful superheroes. But when the kid turns up dead and Jack has been framed for the murder by the cops, things have gotten out of control.

Can Jack find the real killer in time to clear his name?

The Ivory Ring is the third book in a Private Detective series set in a world of superheroes. If you like hard boiled detectives, dames, and superheroes who try to get away with murder, you’ll love the world of Jack Story. 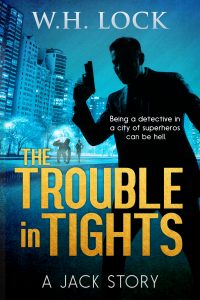 When the world’s most powerful superhero comes to Jack with a case, Jack has no choice but to accept it. The hero’s adopted ward has gone missing, and it’s Jack’s job to bring him back. Things get complicated when the arch-villain and her talking gorillas show up, bodies are stacking up, and the ward just might be dead.
If Jack survives the gorillas and finding the killer, can he survive telling his client? 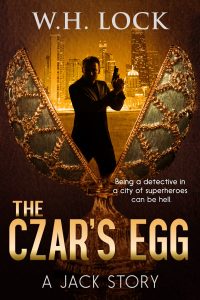 A former superhero wants Jack to find her husband. A husband that is a former supervillain and disappeared chasing a Faberge egg rumored to have mystical powers.
But as Jack investigates, he uncovers the Egg’s long sinister history and the trail of bodies left in its wake. A history of sudden shifts in fortune followed by brutal deaths going back to the original owner, Nicholas II the Last Czar of Russia. Even a professional cynic like Jack has to admit that perhaps those powers aren’t just an urban legend.

After the husband turns up dead in a cheap motel, Jack finds himself in a race against time to stop the killer from getting The Czar’s Egg, an artifact that can grant anything the owner desires, even ultimate power.

The Czar’s Egg is the first book in a Private Detective series set in a world of superheroes. If you like hard boiled detectives, dames, and superheroes who try to get away with murder, you’ll love the world of Jack Story.