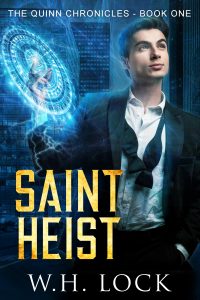 Any Other Story, and he’d be the bad guy.

Quinn is a talented sorcerer and a better con artist. But even the best get caught. On his first day out of prison, Quinn has one thing on his mind: steak dinner. Rare with blue cheese sprinkles and probably those fried onion bits on top.

What he didn’t have in mind, was a member of his parole board asking him for a favor during his first good meal in years. Steal a skull from a powerful LA necromancer. A skull that might grant the owner the power to destroy the world.

Quinn assembles a team of supernatural criminals that should be able to steal the skull before lunch. Except the angelic crime boss forces Quinn to swear a magical oath to not steal the skull. And the necromancer ropes Quinn into a scheme to rob a bank.

Somehow Quinn has to help the necromancer rob a bank. Steal the skull without him noticing and not break his oath to the Angel. And he has to do it while trying to find out who in the group is out to betray him. All of it leaves Quinn with just one question on his mind: why would the parole board want a skull capable of destroying the world? 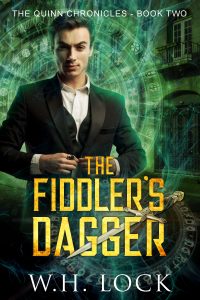 Quinn thought he had it all.

Now the FBI wants Quinn to fix it.

The nefarious pair need one last piece to end the world. A Dagger. A dagger so sharp it can cut the skin of the world open and let the unnamed horrors from outside the universe back in.

Can Quinn steal the dagger before his Ex’s can use it to destroy the world?

And if he does save the world, does that count as getting back at his Ex’s? 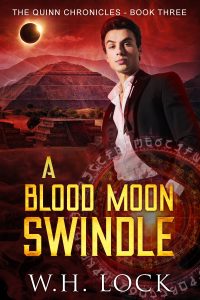 It’s the end of the world and it’s all Quinn’s fault.

Quinn is a talented conman and sorcerer, but even the best get caught. On his first day out of prison, Quinn was offered a job he should have refused. Quinn’s parole officer wanted him to steal a skull from a necromancer in Los Angeles.

It all went to downhill from there.

Quinn put together a team of the best criminals he knew.  Together they stole the skull without getting caught. Only to be betrayed by one of the team and the parole officer. The pair was secretly working for the archangel Uriel in a plot to end the world.

Quinn and his team tried to stop the trio from getting the last artifact they needed to destroy the world, only to fail at the last moment because of Quinn’s antics.

Now Quinn is on the run from the FBI and his former team and he has made a literal deal with a devil.

If Quinn doesn’t save the world he’ll suffer an eternity of torment at the hands of Mamon, the Demon Prince of Greed. If he saves the world, all the debts he piled up will come due.

And those are the sort of debts that take an IOU.

Can Quinn save the world and escape certain death?

If you love Urban Fantasy stories with vampires, dragons, and loads of magic you’ll love the Quinn Chronicle.