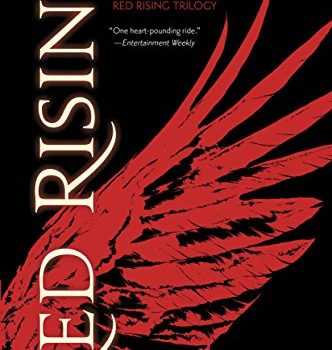 By The Numbers YA Dystopa

Red Rising is the first in sci-fi series by Pierce Brown published by Random House. It’s a fun read but it’s really by the numbers dystopian fiction.

Then made up to look like a richie rich and gets sent of to summer murder camp where all the rich kids murderize each other.

Of course, he meets a nice girl. They kinda fall in love sorta thing but they’re not 100% on it.

Oh, it all takes place on a terraformed Mars. But the murder games is old school sticks, stones, and aggression. ‘Cause you can’t be a rich jerk that exploits the working class unless you’ve strangled someone?

Because I’m not that into murder camp books. They’re kinda fun. I like to see rich people murder each other just as much as the next economically exploited proletariat. But. A lot of it is forced to move the story along to get to murder camp. There’s a whole section about the family and the original love interest that is super rushed. The conversion to the wild-eyed revoltionary was also too fast.

Clearly, this is cut short to get the protagonist into murder camp, because that’s where most of the story takes place.

I really feel that the novel suffers for it. I think it would be okay to spend some more time at home. Get to know the family a bit more. You know?

So, if you’re into the Hunger Games model of dystopian fiction, you should pick this up.

It’s got named cliques. It’s got poor people being exploited. It’s got rich people with kids. It’s got rich kids murdering each other. It’s got an unbelievably handsome and talented protagonist that’s super good at everything but he’s got this 1 flaw that actually helps him in the end.

So, if you love books about dystopian murder camp for teens, you’re gonna love Red Rising.